A rant on Keynesian Economics… Are we headed into rabbit stew?

After posting the “Fear the Boom and Bust” video, I got to thinking…

Please understand, this is an exercise in simplistic thought on macroeconomics and what has happened in America over the last few years. This by no means is a critical disposition of ideas or a collegiate level post on economics… it is just more a post of random thoughts thrown together in a mildly medicated state from my current illness. Before someone wants to come along and tell me how my analogy doesn’t earn an “A” at Columbia, I already qualified that it isn’t intended to be a term paper. It simply falls under part of the header of this blog where it reads “Thoughts on the government, current issues, and the U.S. Constitution” of which I highlighted the relevant parts for the ignorant ones who will want to disregard the disclaimer I just wrote. I am avoiding getting into the nuances of Austrian School disciples such as Hayek and neoclassical methodology vs. von Mises opinions on the matter.

When The Fed tinkers with economic fluxes they create ripples, ripples that turn into waves, waves that eventually crash on shore. If the markets are left alone, the correction of supply side economics will always keep the waves moderate without massive busts like the one we are still in. Nothing can completely prevent failures but the size of the failure can be minimally discharged when left alone.

For all of the lefties who want to blame this recession/depression on Bush, I suggest that you learn just some of the basics of economics. While Bush’s economic policies doomed this nation with a mess, one has to understand that it was a series of strong Keynesian style economic measures that crippled the economy. Remember the big push that was designed to stimulate the economy by giving everyone a shot at the “American Dream” of home ownership? Yeah, the methods of creating that were Keynesian economics. Remember the GM bailout? Yep, another Keynesian measure. Wall Street bailout? You guessed it, Keynesian. Quantitative Easing 1, 2, and now 3? Keynesian again. In fact, every major financial impetus that had “good intentions” was a measure of Keynesian economics. You know what they say about roads paved with good intentions? They go to a very hot place. 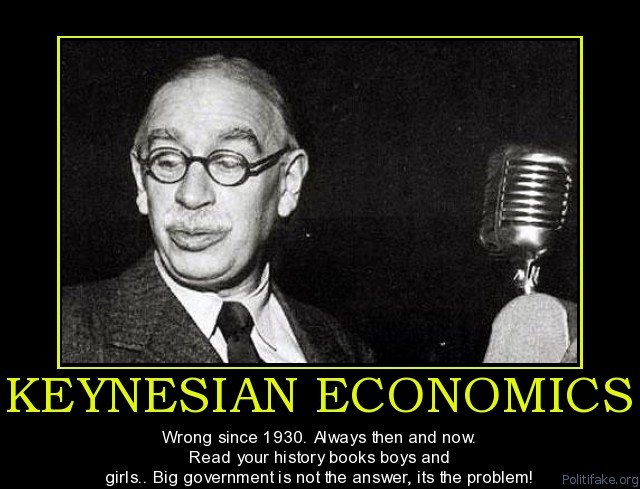 The reality is that although much of this resides on Bush’s tenure, it was a matter of following economic stylings that are inherently liberal-minded. When we work to create economic boosts from demand side planning, we will inevitably create an imbalance in our fiscal stability. If we rely on supply side economics, the markets take care of themselves and people get what they work for.

Keynesian economics are heavily favored by Democrats for a number of reasons. Understanding the basics of macroeconomics will help clue people in as to how politicians play games for your votes. Democrats call for better wealth distribution by screaming about how Republicans are killing the middle class, the poor are getting poorer, etc. but the truth is that those results are caused by Keynesian economics that manipulate the economy. How many people are worse off financially today than they were 7 years ago? Almost everyone, right? Of course they are and that is because we went through one of the largest government interventions in the markets that most of us have ever seen personally. The Fed has played massive games with the amount of money in circulation. Politicians played games with banking policies in the hopes of stimulating economic booms. People spent the money that was easy to come by and now look where we all are. Broke. In debt. Over mortgaged. Credit destroyed.

Republicans, or more correctly conservative libertarians, favor Austrian School economics which work on supply side issues. Should you be paying more for a gallon of milk? Did we suddenly lose half the cows in the US? No, we didn’t. But we did just go through QE1 and QE2 which have created inflation through printing and releasing more money. Austrian economics would not create inflation such as this and the only time we would see an increase in milk prices like we have would be if we lost a third of our cows to some hoof and mouth disease. The increase in the price of a gallon of milk is mostly because the increase in the units of money that is available today. We would see small increases in price due to the fluctuation in oil pricing which would affect the cost of transportation but the price change would be minimal. Instead, we are paying more because The Fed “needed” to stabilize the mess that they started by working in conjunction with a housing boom policy under Bush. They have done such a stellar job getting things under control that The Fed still isn’t sure if we need another full-blown quantitative easing measure to fix it.

Products that are popular will always spur further iterations of that product and as long as the supply is there and the product is useful and worthwhile, then the market will create the value based on it’s demand. Let the economy build it’s strength on the prosperity of supplying goods. It is a business cycle that will always correct itself because it has an effect only on those who are directly involved, not some government politician with an opinion or a central bank that wishes to generate revenue for itself by gambling on the market cycle.

We need to work with the fixed total number of units of money we have, not change the number of units available. In other words… if you have 10 rocks, of which there are only 50 units in existence, then your “unit worth” is easy to figure out. What is the value of your “unit worth” if we now add 50 more units to the total in existence but you still only have those same 10 units? Your worth just went down, didn’t it? Before, you had 20% of the total units available, but now you only have 10% yet you didn’t spend any of your units. Your worth is down because now there are more units around. It is now going to cost more units to get the same things because the “unit worth” of the supplier is down as well and his costs went up because the “unit worth” of his suppliers is down as well and on it goes. I hope that makes some sense to those of you reading it…(Maybe that explanation only makes sense to me at the moment because of the prescription meds I’m taking to beat this fever)

If the economy was left alone, people would still be working hard to buy their house. They would buy a house that matched their income, not their credit that was falsely propped up by government manipulation and loose Federal Reserve money supply practices. If no entity had tinkered with the money circulation, fewer people would have homes today but there would be fewer people with destroyed credit, foreclosures, bankruptcies, etc.

We are wise people if left to our own devices. When a carrot is dangled in front of us, we will work hard to earn it. However, when the carrot is cut up and put on a plate in front of us, we don’t think to look where the knife is or whether we will become a part of rabbit stew if we go after the carrot. Keynesian economics is the diced up carrot and the knife is the booming economy about to go bust. We will wind up in the stew pot when it does go bust. Then what?

11 Responses to A rant on Keynesian Economics… Are we headed into rabbit stew?